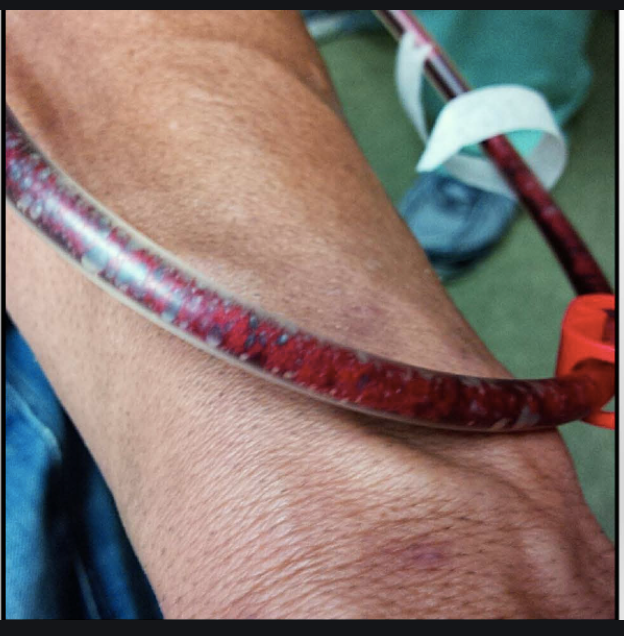 Extracorporeal blood oxygenation and ozonation (EBO2) is one of the newest and most comprehensive method for administering ozone and purifying your blood. Also known as ozone dialysis, EBO2 is an absolute breakthrough in the field of biotechnologies, and is exploding in popularity within the functional and regenerative medicine community.

EBO2 is a method of infusing ozone into your blood outside the body and then infusing it back into your body intravenously. In addition to taking out a small amount of blood a handful of times and exposing it to ozone, EBO2 also adds several other components that take the effectiveness to the next level by integrating them together to pull out and purify the entire blood supply of your body by running it through a special dialysis machine. The entire process is comprised of three main components or steps—comprehensive filtration, ozonation, and ultraviolet blood irradiation (UBI).

During EBO2, you have a tube hooked up to each arm intravenously. Blood is pulled out of one arm with a peristaltic pump and is run through a special, patented filtration system (called a dialyzer). The dialyzer filter has hollow fibers, which means that the filters themselves are made up of thousands of tiny straws that act as filtration membranes. These filters are made of polyethersulphone (PES), which is a class A resistant ozone material. Additionally, the dialyzer is BPA- and DEHP-free, which differentiates it from other available dialysis filters on the market.

When left untreated, these waste particles and cell components chronically assault the immune system, contributing to the development of autoimmunity, a process in which the immune system becomes stuck in attack mode, driving tremendous inflammation indiscriminately throughout the body. This process is the underlying pathology that greatly contributes to, and in some cases is completely responsible for, the vast majority of chronic diseases plaguing our country today, including autoimmune diseases, cancer, psychiatric conditions, type 2 diabetes, neurodegenerative diseases, and many more.

By cleansing the blood of all this immune-irritating debris, EBO2 holds tremendous promise as a potentially viable prevention option for many of these conditions. Additionally, it makes a perfect adjunct to a multi-therapeutic treatment plan as well. In fact, the removal of damaged senescent immune cells alone can reduce this overly active immune dysfunction and lead to the creation of new healthy immune cells that operate efficiently and don’t drive excessive inflammation.

After your blood passes through the initial filtration, it then passes through another chamber where it is saturated with ozone. Ozone is known as nature’s most powerful non-toxic, anti-microbial purification substance. It is a powerful naturally occurring gas that is comprised of molecules that are generated in the natural environment by high amounts of electricity coming into contact with oxygen during thunderstorms.

Ozone is a form of oxygen, but not like the oxygen you breathe. It is oxygen that is restructured when it is exposed to these high amounts of electricity. The molecular structure of regular oxygen is O2, which means it contains two oxygen atoms. When electricity is passed through oxygen, it breaks up the O2 into individual oxygen atoms (O1). Then, as they seek to reconfigure themselves, some of them reassemble with three oxygen atoms to form O3, also known as ozone.

Ozone can be harnessed as a therapeutic agent and administered to patients in a clinical setting. This process, called ozone therapy, is the clinical application of ozone produced by a medical-grade generator to target specific infectious diseases, as well as promote anti-aging, recovery, and general health optimization.6-8

Medical grade oxygen is pumped into one of these generators, which then zaps the oxygen with electricity (a process called electrolysis) and produces ozone gas, which has traditionally been administered to patients intravenously, rectally, or infused into drinking water. However, during this ozonation stage of EBO2 therapy, the ozone generator and oxygen are connected with the gas exchange filter to be used in the second step of purification of your blood.

How Ozone Works During EBO2

There are volumes of scientific literature spanning several decades that demonstrate ozone’s antioxidant properties and ability to neutralize virtually any pathogen (virus, bacteria, fungi) that it comes in contact with.9 In fact, the main role of naturally occurring ozone in the environment is to help purify and stabilize the air as part of the natural cleansing cycle of the planet. As such, it’s not surprising that when we introduce it into the natural environment of human blood, in the right amounts, it can play a similar role.

After ozone enters the bloodstream, it immediately forms secondary metabolites called ozonides. Ozonides consist of special types of reactive oxygen species (such as peroxides and aldehides) that travel through the body and act as signaling molecules for the immune system and various other adaptive processes in the body. These signaling molecules induce a mild amount of “hormetic” stress, which activates the body’s core adaptive response and fuels the communication network that regulates the balance between its immune and antioxidant systems. This amplifies your body’s ability to fight off infections and reduce the excess inflammation that can lead to tissue damage, sepsis, and death in severe cases of infections like influenza and COVID-19.14

For example, ozone has been shown to drastically increase oxygen uptake and utilization in the body through a whole host of different mechanisms. The ozonides that are produced increase a compound called 2,3-diphosphoglycerate (2,3-DPG) in red blood cells, which causes more oxygen to be released by hemoglobin. This super oxygenates the blood, which further enhances the cleansing process of the blood and allows all of its cells to function more efficiently.

Ozonides also improve red blood cell flexibility, allowing the red blood cells that carry oxygen to travel through small or inflamed capillaries more easily, which allows them to reach deeper tissues that are oxygen poor. Ozonides also increase nitric oxide production and allow for an increase in arterial venous oxygen difference, which improves blood circulation and the body’s absorption of oxygen into all of its cells.

The ozonides also have also been shown to activate the body’s NRF2 pathway (nuclear factor-erythroid 2-related factor 2) pathway, which increases key antioxidants like glutathione peroxidase, catylase, and superoxide dismutase, which are your body’s main tools for quelling inflammation once it happens.16-17

This is all significant because one of the main contributing factors that leads to lethal septic shock and death in patients with severe infectious disease is the cytokine-induced blood vessel damage that chokes off the tissues and suffocates them. The increased oxygen utilization also occurs in various types of immune cells (T-cells, NK cells etc..), which increases the amount of energy (ATP) that each cell’s mitochondria can produce.18 This further enhances the overall strength and efficiency of the immune system.

The final step in EBO2 is exposing the blood to a high-powered ultraviolet light, a process known as ultraviolet blood irradiation (UBI). Similar to ozone, ultraviolet light also acts as a powerful oxidant in the blood. For this reason, they are both classified as oxidative therapies, and therefore elicit many of the same effects.

The specific oxidative characteristic of UV light has been shown to stimulate various types of immune cells and enhance their capacity to neutralize excess free roaming pathogens, toxins, excess blood lipids, and metabolic waste products. Several studies have demonstrated that UBI enhances the phagocytic capacity of various phagocytic cells (neutrophils and dendritic cells), inhibits lymphocytes, and oxidizes damaging blood lipids. Several in vitro studies have shown that UBI also affects several functions of red blood cells and various different leukocytes. Most of these cell types activated by UV are immune or immune-supportive cells that help to reduce inflammation in the body and assist in detoxification and fighting off infections. 19-20

Also similar to ozone, UBI provides its own specific brief burst of oxidative stress that stimulates a powerful adaptive response in the blood. This response triggers the up-regulation of many antioxidant defenses that lead to decreased systemic inflammation and increased tissue oxygenation.

Historically, UBI was a highly accepted, virtually side-effect free treatment for infections until the 1940s and 1950s, when its popularity was eclipsed by the debut of penicillin antibiotics and the Salk polio vaccine. In fact, within certain scientific circles, UBI has often been referred to as “the cure that time forgot” because of its profound ability to successfully treat a wide variety of infections without any reports of the pathogens developing a resistance to the therapy over time.

Once the UBI process is complete, the newly purified blood runs out into the tube connected to the other arm and is immediately infused back into your body.

EBOT is the Ultimate Oil Change for Your Blood

During an EBO2 protocol, a full purification loop is made that re-circulates all of your blood over a period of 45 minutes. The entire procedure is 90 minutes long. EBO2 is considered the world’s most advanced blood purification system that integrates the use of medical grade ozone. It is absolutely the “Ferrari” of all ozone devices.

The ability of this method to directly ozonate your entire blood supply is what makes it far superior to any other delivery method for several reasons. It is well established that ozone, in its original form, has the ability to indiscriminately neutralize any pathogen (virus, bacteria, fungus) when it is able to make direct contact with it. But as mentioned earlier, with most standard ozone therapies, the ozone will dissipate within seconds, thereby only allowing it to directly disinfect a relatively small amount of blood close to the injection site. This leaves just the ozonides behind in the body, as well as other products that are produced that deliver all the therapeutic effects previously mentioned, including a milder antimicrobial effect than the ozone itself.

With EBO2, not only is the entire blood supply being saturated with ozonides, but it’s all being purified by ozone and UV light as it all passes through the dialysis machine, which doesn’t give the ozone time to dissipate, as it is constantly reapplied. This means that you can super oxygenate and sterilize your entire bloodstream in less than two hours.21-27

The Promise of EBO2 in Regenerative Medicine

EBO2 works synergistic with many of the main therapies used in regenerative medicine. EBO2 substantially increases vascularity, oxygenation, and cellular energy production, all of which are factors that have been shown to help increase stem cell proliferation, mobilization, and differentiation in the body.28-29

But perhaps the primary reason why it is such a powerful synergistic anti-aging tool when used with other regenerative medicine modalities is because it prepares the body’s internal terrain for these therapies to do their absolute best by helping to clear it of inflammation and infections. Stem cells are very vulnerable to both of these factors, so this creates a hospitable environment for stem cells to work and healing to occur.

Although EBO2 is a relatively new technology on the scene, many of the world’s top experts in oxidative medicine believe that this device might be as revolutionary as the discovery of penicillin. It is quite possible that this therapy, along with stem cell therapy and a few other breakthrough modalities, are going to lead to a complete renaissance in medicine in the coming years and revolutionize the way we approach many life-threatening conditions.